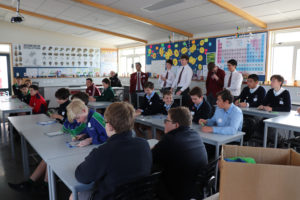 St. John’s College was recently put on show at two events designed to attract new students to the school.

Taste of St. John’s, held on Wednesday (July 29) last week, saw Year 8 students from around Hawke’s Bay come to experience the unique character of the college and all it has to offer.

The open day was held last Sunday and in a break with tradition, it was not an evening event, in order to showcase the school grounds at their best.

St. John’s Head Boy Josh Villanueva said Taste of St. John’s had been very successful with the young visitors showing “a lot of interest” in coming to the school next year.

He says the boys, from schools like St Patrick’s, St Joseph’s, St Mary’s and Hastings Intermediate, were given the opportunity to participate in culinary arts, sport and coding as well as conducting science experiments.

“We took them through that just to give them a taste of what St. John’s do in terms of work,” he said, adding that the day was run by year 13 students with the help of teachers.

Josh said the memory from his own Taste of St. John’s day was how impressed he had been with the Year 13s and his aim had been to do the same with this year’s students.

One of the visitors was St Joseph’s Head Boy Mikko Capio, a 13-year-old Year 8, who said he was looking forward to attending St. John’s next year.

“I found the day quite amazing. I was excited, but a bit nervous at first. When I started to get to know other kids, it made the day fun.”

He said his favourite part was the culinary arts because the food was great.

“They taught us how to make the lolly cake, sushi and all types of different food,” Mikko said.

The Open Day attracted a number of parents interested in sending their sons to St. John’s. They were welcomed and shown a promotional video about the special character and values of the school. The guests also had a chance to answer questions, followed by activities centred around technology, DVC and art, Te Reo Māori, and science.

A key part of the day was an address by Principal Rob Ferreira, who spoke about Gospel values and the special nature of the school.