This year’s challenge, which has been a 70-year rivalry between the two schools, saw St. John’s travel to Hato Pāora, where they received a rousing welcome.

For Director of Rugby and coach Matt Wyat, it is the long-standing tradition between the schools that make these encounters special.

“It’s always a close match between the two colleges but to go down there and have the welcoming we receive is pretty cool.”

“It is really good to see the huge culture and respect being continued by that school.”

As for the game, Brad said it is never easy to go to Hato Pāora and beat them at their home ground. “It was fierce. They came out firing but we just caught them on their off day, I reckon. We were lucky to capitalise on their mistakes and errors and especially weathered the storm at the start.”

Mr Wyatt said the match, the first traditional of the season was made tougher because it was only the second game post Covid-19 lockdown and the team is quite young. “We’ve only got five year 13s, with the rest all made up of year 12s and 11s. There are a few new combinations and  a couple of new boys to the school playing for the team for the first time.”

The victory was made sweeter because it has been two years since St John’s held the cup, with Hato Pāora holding it for four to five years before that.

There was double reason to celebrate after the match because team member Zach Barrett had earned his cap by starting in his tenth traditional or competition game.

Up next for the team is the Central North Island 1XV Rugby 2020 competition, which has been revised because of Covid-19. 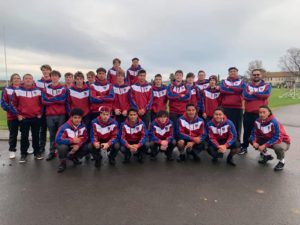