Two St. John’s College students have been selected to the under 13 Hawke’s Bay football side.

Jake West and Nicco Swensson both made the team after successful seasons for their school’s Junior A side.

For Jake, the feeling is special because while he has played age-group representative football before, he missed out on selection last year due to a broken collarbone.

Growing up in football-mad England, with a father who played the sport, and a sister who still plays, it was natural that Jake was always going to love the sport.

Jake, who plays left back, moved to New Zealand in 2017 and says he plays football because it is fun and he likes the comradery.

However, he does have serious aspirations to be a professional footballer for his favourite team, Chelsea. 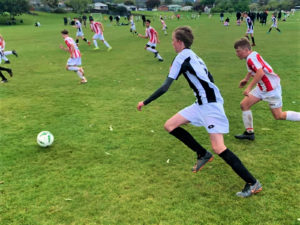 St. John’s College students Jake West (pictured in black and white) and Nicco Swensson have been selected to the under 13 Hawke’s Bay football side.

The season got off to a good start recently with his side beating Gisborne U13 reps twice – 6-1 and 8-1.

He says Covid-19 has had an impact on the school season, but not for representative football.

Nicco says he was quite surprised to make the Hawke’s Bay under 13 team.

“I tried a couple of times and didn’t make it, so it was quite nice to get in this year.”

He believes he was successful because he has focused more on his football this year and received some specialist goalkeeping coaching, which has helped him improve as a goalkeeper.

Nicco also comes from a football family with both his father and brother playing. He was introduced to the sport at the very young age of four years old and says it just made sense to play.

He says the sport means everything to him and is something he enjoys doing.

At this stage, he has not set himself any long-term goals, apart from making the representative squad again next year.