Pear – Symbol of the times

Pear – Symbol of the times

Students from St John’s College in Hastings collaborated remotely to find a solution to a real-world problem emerging from the Covid-19 crisis. 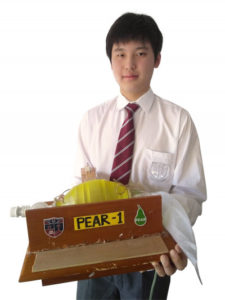 Dylan Wijaya with the PEAR prototype, which may be collected by MOTAT in Auckland.

The Covid-19 crisis motivated this year’s cohort of Year 12 and 13 students who volunteer for St John’s College’s social enterprise programme to work on developing a low-cost prototype ventilator. They all had a passion to do something that would save lives, and the pandemic and worldwide shortage of ventilators motivated them even more, says team member Dylan Wijaya.

Just prior to the lockdown, the students had begun to assess different ideas and concepts for their company PEAR (think Apple computers: but pears being synonymous with Hawke’s Bay). The company’s first product – a ventilator – was to be called PEAR I, or PEAR Classic.

“College closed on the Monday, and a few days later students had decided on developing a low-costventilator,” says David Ivory, the college’s director of social enterprise & special projects and head of commerce.

“This was primarily in response to the widely reported low ventilator numbers in New Zealand. Students wanted to make a real-time difference, and not passively observe developments via the media. The team of eight students spent the first three weeks of the Level 4 lockdown collaborating online daily as they researched and developed the idea of making a low-cost ventilator,” he says.

Dylan says that collaborating remotely hasn’t been too difficult.

“We have a Facebook group chat where all of us bombard each other with new research every day. And we’re all video conferencing every single day and on top of that we get remote assistance from our supervisor Mr Ivory, physics teacher Mr Pohlenz and our principal, Mr Ferreira,” he says.

Grounded by the lockdown, it was up to Dylan to build the prototypes, with four iterations all having limitations. A local engineer donated a 12-volt DC motor, but based on earlier prototypes, it was clear the motor wouldn’t have the power to run a ventilator.

Dylan co-opted his reluctant dad’s hand drill, and PEAR’s product was the result, made from the drill, Lego, wood and a donated Ambu mask (bag valve mask used to resuscitate patients) for a cost of $40.

“We discussed the design and how it’s going to work and save lives since that’s our main goal. Since we were under full lockdown, we couldn’t just go to the hardware store and get the parts that we wanted, so we heavily relied on community donations. It was hard to be working on the prototype by myself and it would have been much easier if all seven of us were working on it, but that was impossible,” says Dylan. 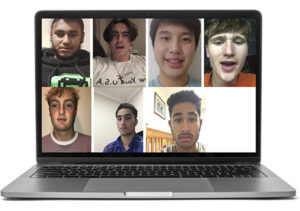 “We won’t be taking the prototype further. The need for a locally made product has diminished and we’re not capable of making a ventilator that will match the global effort of millions of companies such as Tesla and NASA and hobbyists who will have better versions.

“A working ventilator wasn’t realistic in the first place, so we are trying to get the balance between ambition and keeping it realistic, so that we’re not just wasting time.”

Throughout the process of developing the ventilator, Dylan says the group learned not only about how ventilators work, but also about the different measurements that hospitals need to monitor for patients. They are now brainstorming ideas for a piece of low-cost medical equipment to assist in this area.

The concept is still under development and under wraps. However, they will be taking the deconstructed technology and learning and reapplying this towards solving another issue in the health sector.

“We initially planned to refine the ventilator model and make a few more prototypes after the lockdown and open source it for anyone to improve and implement. We hope to do the same for the new product – we believe that’s the most effective way to solve a problem. We’re just some high school students and we’re not capable of producing products on that scale,” says Dylan.

A moment in time

In early May, the PEAR team was approached by MOTAT (Museum of Transport and Technology Auckland), who are interested in adding the ventilator to their collection to represent ‘a moment in time’ during Covid-19.

David Ivory says he didn’t express a view to students on the viability of their product as he sees his role as being one of unconditional encouragement, positivity, and optimism.

“But it didn’t surprise me to learn students did pause, reflect and come to the realisation that there was now no short- to medium-term need for ventilators.

“If at the end of the day a sole story of inspiration is provided and shared with others, that is a real and valid outcome. The school provides an environment where innovation and creativity can, and does, occur. This also needs to be seen within a context of an enduring core college value of supporting others in the community who are struggling or in need,” says David.

As in previous years, students develop a social enterprise product and offer support to a group in the community. Prior to lockdown they reached out to the Recognised Seasonal Employer (RSE) scheme – workers from Pacific Islands who work in horticulture in Marlborough and Hawke’s Bay. They plan to invite them to the college for football and a barbeque every two months once lockdown is over.

Developed over the past four years, St John’s College’s social enterprise programme sees students addressing a societal issue through community and commercial partnerships. As part of developing a social enterprise model, any profit or prize money is donated to the community partners.

“Social enterprise, as practised at St John’s College, is run outside of the curriculum, so students who come from other subject disciplines are keen to engage – to give up their time in return for assisting and reaching out to the community,” says David.

“I think these students are the beneficiaries of a culture of social enterprise/project work at the college. They clearly know there are no discussions in class time around projects/social enterprise. Students are spread out in their homes across Hawke’s Bay and are skilled with time management and working under pressure, so they probably had an advantage to cope with the new circumstances,” he says. 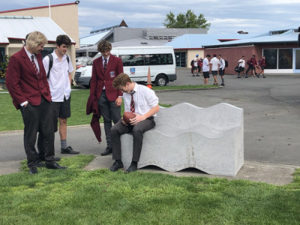 Trying out the Environcrete seat for size.

Just as this article was going into production, the PEAR team heard they had been granted $300 from the nationally contested University of Waikato’s YES Equity Seed Funding.

“The students will use funding for ongoing research and development, specifically for the purchase of electronic components,” says David.

St John’s College principal Rob Ferreira says the social enterprise programme, which has grown over the past three years, provides invaluable experiences for the school’s students.

“A number of staff are involved, and David Ivory has been the main staff member working with the students. His inimitable teaching and leadership style has meant our students have been able to collaborate and use all of their entrepreneurial skills to come up with a number of worthwhile projects.

“This particular venture has really made me proud of these young men, as they have made a functional ventilator from spare parts at home, mainly during Level 4 of the lockdown. The way they have had to communicate and collaborate with their peers and teachers to make this product is incredible,” says Rob. 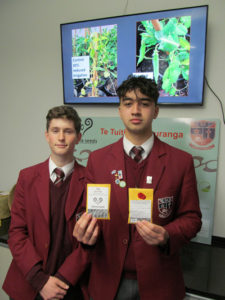 Louis Gaffaney and Kupa Pohe show some packaging for the Āwhina Seeds project.

2018–ongoing: Students volunteered at a local mental health facility; developed GEORGE, a low-cost flooding and rain detection unit. Research and development continues, with solar panels being attached so it can work in remote locations without cellphone coverage.

2019–ongoing: Students partnered with Recognised Seasonal Employer (RSE) to help overseas workers feel part of the community. Development of Environ-Crete made from waste and recycled materials. A precast ‘Environcrete’ seat containing waste plastic has been installed at the college. Discussions are underway with local councils in Napier and Hastings about possible manufacture and placement of the seats around the region. 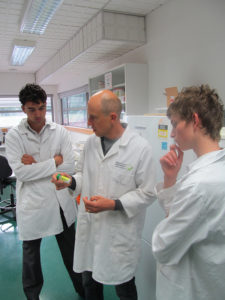