Click on the link below to read the full article in the Education Gazette.

Symbol of the times 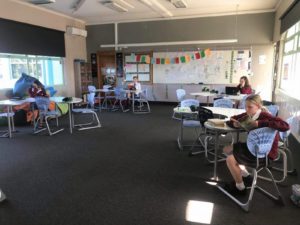 Many families found that Covid-19 Alert Level 3 lockdown brought them closer together and this was no different for Sacred Heart College and St John’s College, with cooperative learning taking place during that time.

Around the country, essential workers’ children in Years 9 and ten who did not have anyone to look after them at home, were able to go to school where they were cared for by teachers and in many cases their school’s principal. They participated in their school’s online learning programme but were kept in their own bubbles at the school. For many schools, there were often under ten students coming in each day, with some schools reporting one or two.

The idea worked well, with up to seven students in total attending both schools each day, including one St John’s boy, Devon Williams, at SHC.

Having attended St Patrick’s School up until moving to St John’s this year, Devon is no stranger to a co-ed environment. Despite being “forced” by his essential working parents, Devon says he “thoroughly enjoyed” being at school.

“I had loads of fun. I got to hang out with some of my old friends from primary school and we did lots of learning,” the 14-year-old said. Because I have 12 or so friends at the school but sadly only one of them turned up but I wanted to catch up with them all because I hadn’t seen them in a very very long time.

Each morning, Devon, along with his seven-year-old sister, Autumn Sobek would be dropped off at St Patrick’s school from their home in Pirimai, where SHC’s deputy principal would then pick him up and take him to his temporary school.

At school, each student had their own desk, appropriately spaced out from each other.

Despite slightly different timetables, Devon was able to join the girls’ in doing PE and have lunch with them.

Year 9 SHC students Makaela Fisher, Arliyah Rangiaho-Clay along with year 10 student Bella Leonard joined him. While they all enjoy “normal school” more as they get to see their friends and teachers, the students said it wasn’t too bad.

Bella said it was a “lot more” structured than when she was at home. She was still able to call her friends to “check-in” with each other.

For Makaela, going to school during level three was a non-negotiable, but it was made better by having her primary school friend, Devon with her.

“He was like you’ve got to go because he didn’t want to be alone at a girls school and I was his only friend who was a girl,” she said.

Being the only students at school proved to have its perks. “We got to go on walks with the teacher and explore the hill and other areas,” she said.

The online learning environment provided a prime opportunity for the two school’s Māori departments to collaborate for the first time.

On May 13, after a week of studying Kīwaha – proverbial sayings, on Education Perfect, with both teachers guidance, they had a zoom conference where the 20 students competed in a Kahoot quiz.

“We kept it very simple,” Whaea Hilman said. “It was about introducing the students to each other, to new learning and this current form of learning which is online.”

The group comprised of year 10 to 13 students with a mix of ability in te reo. Whaea Hilman said it was a “nice competition” between the students.

In the combined class, they even had a brother-sister combination. “That was quite cute. They were both in separate rooms in their house and they were certainly competing against each other,” she said.

“The feedback from my girls’ was they were keen to do it again. We are now in the process of discussing what that will look like now that schools have gone into Alert Level Two.”

“The end goal is that the students achieve success and being comfortable talking.”

Year 11 SHC student Aroha Tawhiri won the quiz. “I found it pretty easy and it was a really fun experience to do it with the boys,” the 15-year-old said.

Having attended a Kura Kaupapa before high school, Aroha is currently doing NCEA Level Two in te reo Māori. “I knew some terms from my old school because we used to say them all the time. I was kind of nervous but then I was kind of not.”

She says she found online school “good” and noticed that she had been finishing her work “a lot quicker than usual”.

Mr Solomon said it “definitely” helped with student motivation and being able to see students that they don’t usually see was a bit of a novelty.

He hopes this is the “start of something”.

“We’ve been talking about getting our schools together and doing more with things like kapa haka and Matariki celebrations, and they are in the pipeline but this is the first time both of us have come together.” 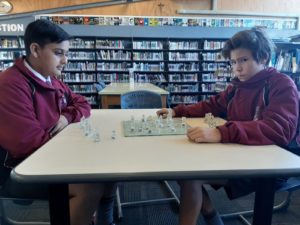 A new format chess competition has seen three St John’s College students step up to the board, securing a place for the school at the National Finals.

For Hunter Wilson, having only started learning and playing the game in March, didn’t stop him from placing eighth in the senior category and receiving the Pawn Power Badge.

Jeevanjot said he just wanted to try his best in the tournament.

“I thought the tournament would be a good experience and it means a lot to win because I didn’t think I would.”

The year 9 student started playing a year ago and was drawn to how peaceful the game is, but also the strategy involved. “I saw it on youtube and it just looked cool to me,” he said.

Accounting teacher Simon Thomson, who is in charge of the chess club, said he was proud of what the boys’ had achieved.  Although, he feels like he hasn’t “done much”, rather just coordinate it, as lockdown came into effect a week and a half after their first met for the year.  The new teacher took up the opportunity to lead the club after the teacher formerly in charge of the club retired at the end of last year.

At this stage, they have 20 boys’ registered in the club and are hoping to get more people involved. A chess ladder is being organised to allow the boys’ to play somebody with a higher skill level than themselves.

Operations manager and founder of Chess Power, Paul Macdonald, said Covid-19 and the subsequent lockdown meant they were not able to run in-person events. “With Covid-19, that pretty much destroyed that whole structure that we normally operate in.”  As a result, they built technology that allowed the chess tournaments to be run online which enabled a caregiver to register a participant, and for participants to take part in the tournament in real-time by being able to connect to the arbiter, and also play chess.  “It is very responsive. As soon as they make a move, their opponent will get that move on their board instantly and it keeps track of their time as well,” he said.

They had the intention to run four competitions comprising of the 30 regions, but schools reopened term three tournaments in-person giving the 25 regions who were not able to participate, a chance to make the nationals in November.

Having started Chess Power ten years ago, Macdonald says they believe chess is a “great way” to build key life skills around decision making, focused concentration, how to take risks, and strategical thinking.  “There’s nothing like chess, it’s unique and it is purely intellectual in that you out-win your opponent by thinking and we think thinking is a really important skill for the future,” he said.

The Chess Power National Finals will be held in Auckland on Friday, October 16.   A special invitational tournament, Champions Trophy, held for the best youth chess players across the country will be held the following day.

They had the intention to run four competitions comprising of the 30 regions, but schools reopened the following week meaning they weren’t able to continue. They now plan on holding their usual term three tournaments in-person giving the 25 regions who were not able to participate, a chance to make the nationals in November.  Having started Chess Power ten years ago, Macdonald says they believe chess is a “great way” to build key life skills around decision making, focused concentration, how to take risks, and strategical thinking.

“There’s nothing like chess, it’s unique and it is purely intellectual in that you out-win your opponent by thinking and we think thinking is a really important skill for the future,” he said.

The Chess Power National Finals will be held in Auckland on Friday, October 16.

A special invitational tournament, Champions Trophy, held for the best youth chess players across the country will be held the following day.